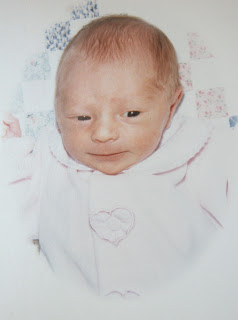 Thirteen years ago today, I woke to contractions. I was 34.5 weeks pregnant and scheduled for a hospital visit and pre-registration later that morning. We met my ob-gyn at her office beforehand. I still remember her words, "What do you think?"

"I think we're going to have a baby, today."

My son had been born 9 weeks prematurely. Doctors tried to stop the contractions without success. This doctor was hopeful my contractions would stop. She sent us to pre-registration at the hospital, asking them to check me again at the end of the visit.

We were given a quick tour by a very nervous receptionist. My water broke at the end of the visit and we were quickly moved into the room we had just toured. I was going to have another preemie.

There were several complications during the birth, the most dangerous being the umbilical chord was wrapped around our daughter's neck not once, but twice. Each contraction would be bring a slowing heartbeat. Enter high doses of Pitocin and I dilated from 3 cm to 10 cm in 20 minutes, avoiding a C-section by minutes. Our daughter arrived, weighing just 4 pounds 4 ounces, tiny and blue. Yet, like Kate DiCamillo's tiny mouse, Despereaux, she was "born with eyes open." My husband and I will never forget when she turned her tiny head to look directly at him the first time she heard his voice outside of the womb. The bond formed at that moment was a bond that will last a lifetime.

She was unable to maintain her own body temperature and her heart rate was of concern. She was rushed to the neonatal intensive care unit, her home for her first week. Doctors discovered a reflux that affected both breathing and heart rate and she would go home with a monitor that weighed nearly as much as she. It would be her guardian for the first year of her life.

The reason for my premature births remained a mystery. I did not drink or smoke. I ate well and exercised. I was not severely under or overweight. I was told that if we chose to have a third child, it would be a preemie. The doctor was right. Nearly five years later, our youngest entered the world, at almost the same age as her sister, weighing just 2.5 pounds. It would be many more years before we would learn the reason for the premature births. I was fighting a chronic bacterial infection. I had Ly 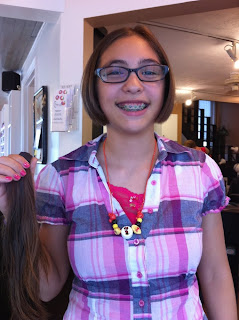 It has been well documented in scientific literature that the Lyme bacteria, Borrelia burgdorferi, can cause miscarriages, premature births and still births. Transplacental transmission has also been documented and we are convinced both of our daughters have been fighting this disease since birth. I would love to see Lyme tests for mothers and infants after unexplained premature births, though I wish we had a better test, knowing that the current test would potentially miss many.

On this day, we celebrate our daughter, a beautiful young woman, who brings so much joy to those who know her. We give heartfelt thanks to the fabulous doctor who saved her life at birth and to the fabulous doctor who has given her a new lease on life as she continues to fight Lyme and its co-infections. We are blessed beyond words.
Posted by Kim at 8:26:00 AM 5 comments: Links to this post

Got this latest Lyme news in my inbox this evening. You can let Congress know you support the Lyme groups' decision by signing this form and the LDA will send your reply directly to Congressman Christopher H. Smith (NJ).

In a move designed to protest the Institute of Medicine’s upcoming Lyme disease workshop, three of the nation’s largest and most influential Lyme groups have pulled out of the process. After much deliberation, speaker Diane Blanchard, co-president of the Time for Lyme (TFL- CT) has withdrawn from the panel. The national Lyme Disease Association (LDA- NJ) and the California Lyme Disease Association (CALDA), along with TFL, will not participate in the workshop and their IOM commissioned scientific paper will not be submitted.

The scientific workshop was promoted by the Institute of Medicine (IOM) to be a conference about the state of the science regarding Lyme and tick-borne diseases. Despite the groups request for transparency and a balance of scientific viewpoints, as delineated in Congressional Appropriations language, neither the hearing panel nor the speakers selected by the IOM satisfy the Congressional intent or objectives. The IOM’s mission was to provide “independent, objective and non-partisan” advice to policy makers, yet the majority of the participants sitting on its Lyme disease panel belong to the Infectious Diseases Society of America (IDSA), a medical society with a known bias. Many key speaker roles were given to physicians who are IDSA members and supporters, a number of whom were involved with the IDSA’s controversial guidelines for Lyme. IDSA’s Lyme guideline development process was investigated by the Connecticut Attorney General which resulted in exposing the guideline panel as being riddled with undisclosed conflicts of interest.

In spite of the recommendations to NIH by Congress, the conference opens with perhaps the most polarizing figure in the chronic Lyme debate-- Dr. Gary Wormser of Westchester Medical Center -- who chaired the IDSA Lyme guideline panel and whose highly controversial biased views are well known. There are no scheduled speakers with opposing viewpoints of similar scientific weight to balance his presentation about the research gaps in Lyme disease. Many state-of-the-art scientific researchers and experienced clinicians have been relegated by the IOM and NIH to simply spectator positions.

The patient-oriented Lyme groups believe that this amount of bias undermines the integrity of the scientific workshop and that its final report will reflect this lack of objectivity. “We believe the entire process has the potential to cause additional harm to patients. After much deliberation our only recourse is to withdraw our support for this seriously flawed process. From the inception, TFL, LDA and CALDA have communicated our concerns, which were ignored. We remain hopeful that NIH/IOM will revamp the program to comply with the Congressional language which was responsible for initiating the workshop,” the groups said in a joint statement.

Time for Lyme, www.timeforlyme.org, the national Lyme Disease Association, www.LymeDiseaseAssocation.org, and California Lyme Disease Association, www.lymedisease.org, are non-profit organizations that were founded by individuals who had personal experience with Lyme disease, in order to address the lack of research, education and support services available for this emerging infection.

Last week, I got this message from a friend on Facebook:

"Hey, we're on vacation and wife insisted that I send u a message. I pulled a deer tick out of my thigh 2 weeks ago. Big itchy spot at site now. no big ring. Kinda achy. How late is too late to be tested and start antibios if needed? So sorry to bother you with this, but wife worries a lot.”

There does seem to be a lot of confusion around what to do if you get a tick bite. And given my experience down the long, rutted, windy, washed out road of chronic Lyme, knowing that if I could change the past I would (i.e. eradicated the buggers before a deep set infection requiring YEARS of antibiotics set in), I wrote back: GO TO URGENT CARE AND GET ON ANTIBIOTICS ASAP. Then find an LLMD when you get home.

So for next time, you or I get a message like this, here's a post you can refer your friends and family to. The best resource out there is Dr. Burrascano's Advanced Topics in Lyme Disease from the International Lyme And Associated Diseases Society site. On page 19, He reccomends antibiotics for 28 days if you just get a tick bite, and six weeks if there's a rash. In the Appendix on page 32, is the rational for treating ANY tick bite:

RATIONALE FOR TREATING TICK BITES
Prophylactic antibiotic treatment upon a known tick bite is recommended for those who fit the following categories:


1. People at higher health risk bitten by an unknown type of tick or tick capable of transmitting Borrelia burgdorferi, e.g., pregnant women, babies and young children, people with serious health problems, and those who are immunodeficient.


2. Persons bitten in an area highly endemic for Lyme Borreliosis by an unidentified tick or tick capable of transmitting B. burgdorferi.


3. Persons bitten by a tick capable of transmitting B. burgdorferi, where the tick is engorged, or the attachment duration of the tick is greater than four hours, and/or the tick was improperly removed. This means when the body of the tick is squeezed upon removal, irritated with toxic chemicals in an effort to get it to back out, or disrupted in such a way that its contents were allowed to contact the bite wound. Such practices increase the risk of disease transmission.


4. A patient, when bitten by a known tick, clearly requests oral prophylaxis and understands the risks. This is a case-by-case decision.


The physician cannot rely on a laboratory test or clinical finding at the time of the bite to definitely rule in or rule out Lyme Disease infection, so must use clinical judgment as to whether to use antibiotic prophylaxis. Testing the tick itself for the presence of the spirochete, even with PCR technology, is helpful but not 100% reliable.


An established infection by B. burgdorferi can have serious, long-standing or permanent, and painful medical consequences, and be expensive to treat. Since the likelihood of harm arising from prophylactically applied anti-spirochetal antibiotics is low, and since treatment is inexpensive and painless, it follows that the risk- benefit ratio favors tick bite prophylaxis.
Posted by Kim at 7:38:00 PM 9 comments: Links to this post