Thank you, thank you for this film: a review of Under Our Skin 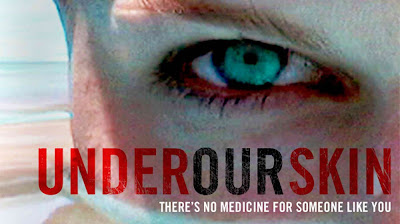 Watched Under Our Skin last night. It made me angry. It made me cry. While I cannot make sense of our incompetent and what appears to be politically and financially motivated medical community, I did, thanks to this film, start to make sense of what I've been feeling, physically and emotionally.

More than one person they interviewed said they'd consider killing themselves if they didn't have family obligations--the pain, neurological dysfunction, emotions, lack of support (medically and otherwise) is so intense. And, frankly, going through this myself, I can see how one could feel so hopeless. So, GO SEE THIS FILM, if not to support your Lyme suffering friends (i.e. me), but to protect yourself and your family from this spreading, debilitating, constantly misdiagnosed disease. It's easily curable if caught early and treated appropriately, but people like me, who make it to "stage 3" might not ever get well.

Jordan Fisher Smith, the Sierra Nevada park ranger interviewed in the film gave me hope, when he said that after years of antibiotics and seeking out the top Lyme doctors in the country he was "finally getting his life back." Sadly, I read today that since the filming, he's now divorced. The toll of Lyme on families is that great. Mandy's story too was inspiring as--thanks to her antibiotic regiment--she goes from nearly being crippled, to swimming laps by the film's end.

I'm so grateful for Andy Abrahams Wilson at Open Eye Pictures for taking on this topic and raising the awareness of tick-borne disease. I hope this film is wildly successful and opens the eyes of doctors, insurance companies, government officials, and the friends and families of Lyme patients. I'm also feeling so grateful to have found a Lyme-treating doctor and living in state where he can practice freely, because as you'll see in this film, that is not the case for many.
Posted by Kim at 9:16:00 AM

Email ThisBlogThis!Share to TwitterShare to FacebookShare to Pinterest
Labels: kim, reviews, Under Our Skin